Literature / The Tale Of Magic 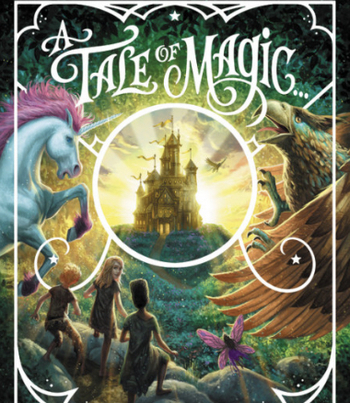 A Tale of Magic is a Prequel series to the book series The Land of Stories. They are both written by Chris Colfer.

In the Southern Kingdom, magic and women reading is outlawed. This is a problem for Brystal Evergreen, a fourteen year old Bookworm who discovers she is magical through a book. When she is exposed, she’s sent to a “correctional facility” to cure her of her “condition.” But then, Madame Weatherberry comes along, stating she has permission from the king to take Brystal to a school for magic. Brystal goes to the school with her classmates Skylene, Tangerina, Xanthous, and Lucy. All seems to be going well until Madame Weatherberry embarks on a mission, and doesn’t return...

Currently, there are two novels: A Tale of Magic and A Tale of Witchcraft. Any new releases have not been announced.