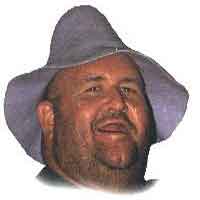 Stanley C. Frazier (August 16, 1937-July 1, 1992) was an American Professional Wrestler. He debuted in 1960 and competed in Southern promotions for decades, arriving in WWE as part of Hillbilly Jim's "family." He passed away in 1992.
Advertisement:

He was a 1x NWA National Tag Team Champion