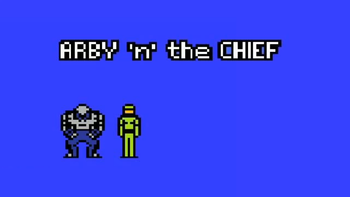 i r guy who gon t33ch u less0n!
"This is going to be a great relationship. I can tell."
— The Arbiter
Advertisement:

is a Machinima/Live-action comedy created by Jon Graham (formerly known as "DigitalPh33r"), who also produced Deus ex Machina (2007). The series follows two figurines based on Bungie and Microsoft's Halo series coming to life while their owner is away. As the title suggests, the main characters are based on Master Chief (a Leet Lingo-speaking Jerkass whose only concern is how much he "pwns" in any given game, something that he is completely incapable of actually doing) and the Arbiter (a Deadpan Snarker who often acts as the voice of reason to the Chief's mindless ranting). One of the unique features of the series is that many of the characters actually speak through a PC voice synthesizer instead of acted voice-overs. The series is based on Graham's previous shorts, Master Chief Sucks At Halo, where the series' trademarks (including synthesized voice-overs and the Chief's personality) were developed.

The series was a massive hit among Machinima subscribers and has garnered a substantial following which helped propel the series to greater heights and wider recognition. Even though Jon Graham is working on future projects such as Chemotheraplay, Arby 'n' the Chief is already being labeled his best. In fact, many consider it to be one of the best shows that Machinima has featured on their channel.

The original series initially ended after the third season with a six-part finale, "Endgame". The finale led to a spin-off, Arby 'n' the Chief in LA, produced entirely by Machinima.com with minimal input from Graham. After a break from the series, Graham announced a fourth season of Arby 'n' the Chief in 2010, which later ended up canceling out the L.A. continuity in favor of a more streamlined narrative. This was followed by a fifth season in early 2011, and a sixth season in mid 2011. A seventh season was announced and premiered in early 2012, and finished on August 17th, 2013, ending the show as a whole...

The show also had two spinoffs made by Jon himself- "Hypermail", which had Arby and Chief "out of character" as they answered fanmail and provided updates on the development of the main series, and Bytes, a three-season Gag Series that counteracted the increasing Cerebus Syndrome of the concurrent main show by hearkening back to the roots of the series by portraying the duo in lighthearted comical antics. (Seasons 1-2 are non-canon, while Season 3 is canon and ties into the main series.) While Hypermail has long since ended, Bytes is still being produced. The series also had a prototype in the format of Master Chief Sucks At Halo, which is Exactly What It Says on the Tin: Chief being awful at Halo. Interestingly enough, Jon would revive the format nearly a decade later, only this time with Chief being awful at a variety of different games. The Chief Sucks At X series is sporadically updated and runs concurrently to Arby n The Chief.