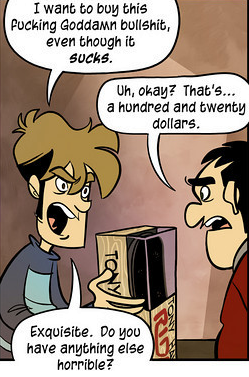 "Sure, here's a link to TV Tropes."
Razputin: If you hate the show so much, why don't you just leave?
Jasper: I just can't take my eyes off it! It's like watching the scene of a horrible car accident... A car accident where the victims can't act, and the paramedics forget their lines!
— Psychonauts
Advertisement:

There's Hype Aversion, when numerous people's rabid touting of the latest masterpiece deter you from rushing out and buying it. And then there's the reverse phenomenon, when numerous people's rabid panning of the latest uber-stinker, complete with detailed lists on why you should never, ever, ever buy this piece of dung actually fill you with the masochistic urge to rush out and buy it just to see if it's that bad.

It's like hearing about the train wreck of the century: Your better sensibilities are repulsed at the thought of it, and yet part of you wants to see that wreck in all its magnificent destruction. You want to see just how gloriously terrible it must be for all the high-profile people to be expressing their horror over it.

Don't feel ashamed about it; it's the natural foil to our obsession with the best of the best. Just as we want to know how high in brilliance art can rise, we also want to know how low it can sink in sheer awfulness. Plus the fact that reviews spewing bile over the many ways something stinks tend to be far more entertaining to read than reviews extolling the virtues of the latest Oscar Bait.

This feeling is sometimes the basis of So Bad, It's Good. Distinct from No Such Thing as Bad Publicity in that the criticism is concerning the quality of the work, rather than the content. Compare and contrast Just Here for Godzilla and Watch It for the Meme. Can make the film in question become a Guilty Pleasure for some and, if enough people disagree with the majority, a Cult Classic. Similar to but not quite Schmuck Bait.

An In-Universe example. Zomburger intentionally make their food as bad as possible to boost sales.

Example of:
No Such Thing as Bad Publicity

An In-Universe example. Zomburger intentionally make their food as bad as possible to boost sales.