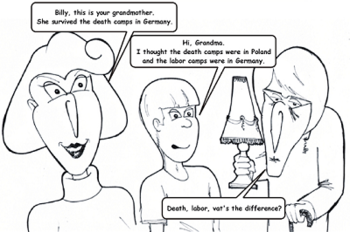 "The basic story is that some wealthy jews adopt Billy (a goyim) after a mix-up at the adoption center. Billy is trying to fit into an ultra-rich-neo-con society as a crypto-white nationalist and his parents are always trying to change his un-PC ways/statements. "
— Announcement by the author numeronean

Billy the Heretic is an infamous webcomic purporting to be an autobiographical account of a white African boy who was adopted by a family of Jews. Let's put it this way: instead of linking to a few other webcomics, it links to the infamous white supremacist website Stormfront. The creator has described it as "the white nationalist's Dilbert".

If you want to take a look, here it is.