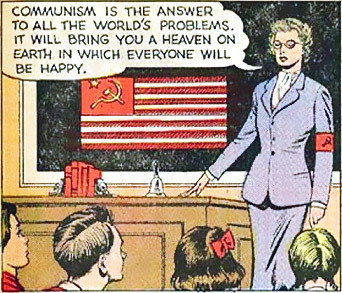 Thompson: It's the Rapture, Shauna, the Rapture! The virtuous have gone to Heaven, and the rest of us have been...Left Below! We were fools! And because we rejected God (tacitly accepting Satan), we must suffer through the Apocalypse.
Buddhist Monk: I thought all religions were a path to God. I was wrong!
Scientist: Why did I put my faith in science and technology?!
Homosexual: Oh, why did I choose to be gay?!
— The Simpsons, "Thank God It's Doomsday", Left Below
Advertisement:

All writers put something of themselves into their stories, but some of them go just that little bit too far. For them, the real point of writing is not to shape worlds or create characters, but to preach their ideological beliefs.

This is not always a bad thing. For some works, the premise is simply a way of putting a political point across in an interesting and imaginative way. Also, sometimes things just have to be said in the most blatant way possible to be understood. However, when the message comes across as forced or one-sided, it may prevent some readers from enjoying the book and it will hinge upon where an individual puts their line for where it becomes annoying.

Note that this only applies when the entire universe and characters have been created to put forward the author's viewpoint. If an existing fictional universe or character has been altered to create a medium for a tract, then it's due to a Writer on Board (Author Filibuster is an extreme example of that). If the author's just filling up their story with stuff they like, that's Author Appeal. If it's gotten to the point where the tracting (or whatever personal issues the author has) has all but taken over the author's work, then the author has entered Filibuster Freefall.

Contrast What Do You Mean, It's Not Didactic?. May overlap with Artistic License and Take That!. If being an Author Tract is the whole point of the work, see Propaganda Piece.

Environmentalist stories should be nothing but political filibustering about how nature = good, man = bad (and whatever else the author thinks).

Environmentalist stories should be nothing but political filibustering about how nature = good, man = bad (and whatever else the author thinks).