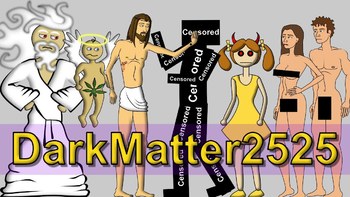 is a YouTuber who criticizes organized religion, particularly Christianity and Islam, mostly with animated cartoons, at the same time promoting atheism. Due to the inherently controversial nature of the subjects he talks about and threats that he receives, Dark Matter keeps his identity confidential, though he and his wife have appeared in many videos as themselves, along with voicing characters. He also has a secondary channel, Dark Antics

, in which he discusses the same issues as himself rather than with animations.

The animated videos have a recurring cast of characters, among them:

Other than these, there are also many, many other characters, depending on the story being analyzed and criticized. Often, they are a parody of a celebrity, while other times, they are regular people who just got caught in God's machinations.