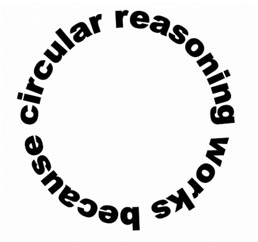 If A, B, or C have independent proofs that are "outside the loop", it is no longer circular reasoning.

The simplest form of this is a tautology (like defining "sports writer" as "a writer who writes about sports".) See also Shaped Like Itself and Famous for Being Famous. A similar concept is a logic loop, a type of Logic Bomb where a series of thoughts leads to itself.