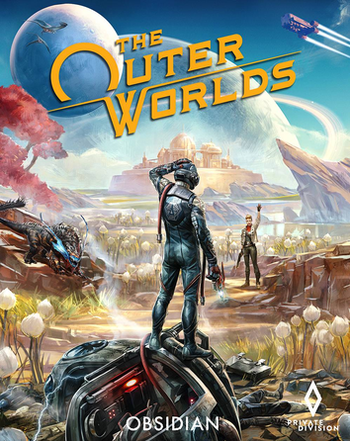 Welcome to the future. Try not to break it.
"Welcome to the edge of the galaxy, the frontier of space... Well, at least it was, until the corporations bought it, branded it, and started selling it at ludicrously inflated prices!"
Advertisement:

The Outer Worlds is a Science Fiction First-Person Role-Playing Game developed by Obsidian Entertainment and published by Private Division. The game is notable for having Tim Cain and Leonard Boyarsky as directors, two of the founders of defunct Troika Games and key staff in the creation of Fallout.

The game was released on October 25, 2019 for PC, PlayStation 4, and Xbox One. A Nintendo Switch version was released digital-only on June 5th, 2020.

There are two story-driven DLC expansions:

Not to be confused with Outer Wilds.

open/close all folders
# to D
E to L
M to R
S to Z
Our future is uncertain and no one knows what tomorrow holds. Exciting, isn't it?