Radio / The Men from the Ministry 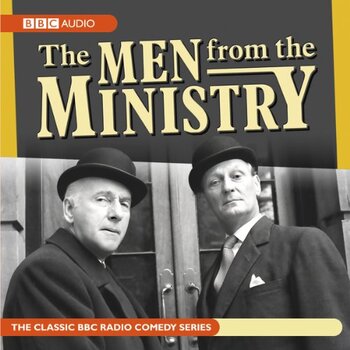 Lamb: A letter from the Ministry of Housing, One. They say that their "Permission refused"-stamp has worn out, and they want to borrow ours.
Hamilton-Jones: Well, they can't have it. Stamp their letter "Permission refused" and tell them we haven't got one.
Advertisement:

The Men from the Ministry is a radio sitcom and political satire produced by The BBC which ran from 1962 to 1977, with one additional series made of re-recordings produced by BBC Transcription Services in 1980, which was never aired. This radio forerunner to the Yes, Minister was created by Edward Taylor and starred Wilfrid Hyde-White and Richard Murdoch as civil servants Roland Hamilton-Jones (“One”) and Richard Lamb (“Two”), with the former leaving after two series and being replaced by Deryck Guyler's Deryck Lennox-Brown (Also referred to as “One”). Other characters of the show are the duo's secretary Mildred Murfin (Norma Ronald) and their rather tyrannical, self-centered boss and Permanent Under-secretary, Sir Gregory Pitkin (Roy Dotrice on the first two series, Ronald Baddiley third series onward).

The show is set on the Ministry's “General Assistance Department,” an office in Whitehall that is designed to help other offices when they are overloaded with too much work. Typical episodes are centered around one or two assignments given by other offices. The staff of General Assistance Department are lazy and incompetent people determined to tangle in every bureaucratic thing, and Hilarity Ensues: Assignments are mixed up, there are memos and letters that end up to the wrong people and misunderstandings resulting from communication problems. The result is usually complete chaos, ranging from traffic wardens ending up with ballerina outfits to the whole of Britain losing all physical currency.

Outside of its fifteen-year run in Britain the show had a version produced in Sweden by Svergies Radio (SR) in 1963-1971. From there a bunch of scripts ended up in the archives of Finland's Yleisradio (YLE). A Finnish version was first produced in 1979 and ended up being the third most popular radio show of the country, lasting for 30 years.