Series / That Mitchell and Webb Look 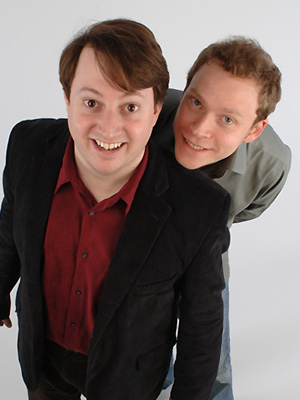 That Mitchell and Webb Look is a BBC Two Sketch Show starring David Mitchell and Robert Webb, best known for their characters Mark and Jeremy in the Brit Com Peep Show. It ran from 2006 to 2010. Recurring characters tend to be limited to one series, although some (such as The Surprising Adventures of Sir Digby Chicken-Caesar) have run for longer. The sketches are occasionally intercut with Faux Documentary "behind-the-scenes footage" of the comedians, featuring much Lampshade Hanging and Self-Deprecation, and zigzagging between mocking and playing up their respective Smart Guy & Manchild personas.

The series was adapted from the radio show That Mitchell And Webb Sound, and the pair had previously made a short-lived TV Sketch Show called The Mitchell And Webb Situation. For ease of reference, tropes found in each series have been put into separate sections.

That Mitchell and Webb Look contains examples of:

That Mitchell and Webb Sound contains examples of:

The Mitchell and Webb Situation contains examples of:

A brain surgeon brags about how hard his profession is, but gets put in his place when he meets a rocket scientist.

Example of:
This Ain't Rocket Surgery

A brain surgeon brags about how hard his profession is, but gets put in his place when he meets a rocket scientist.