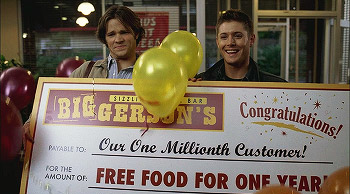 Congratulations! You're the one millionth customer of Honest John's Dealership! Or maybe you're the ten thousandth customer of the Malt Shop! Or maybe it's just an ordinary shop in an ordinary mall. Well, either way. YOU are the lucky person that's a milestone of their history—you are their hundredth/thousandth/millionth/billionth customer, and what better way to show their appreciation than to give you this random item?

Expect a shower of confetti and balloons when this occurs, almost as if it was a birthday party. Which it technically is, just for the company.

In reality, for the very very very VERY few places that actually do this, it'll simply be something small like a commemorative pen or badge. In media, however, this item (or series of items) will be something either extravagant or extremely desired—so, the conflict of the episode will sometimes either be resolved by or revolve around this item. Of course, sometimes it's not the item that drives the plot — it's the event itself, especially when its appearance can be a hindrance to the recipient.note The two most likely forms is that this stops him at a time where he needs to quickly get somewhere, or it publicizes him when he needs to remain inconspicuous.