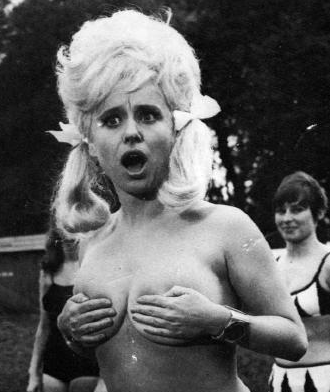 "Now, really let's see those chests come out!"
"The team who turned so many of our national institutions into riotous comedy."
—Carry On Cabby trailer

The Carry On films were a long series of movies made with a diverse troupe of British comic actors from The '50s to The '70s and an excellent example of a Universal-Adaptor Cast. All were produced by Peter Rogers and directed by Gerald Thomas.

Over the years, different actors would join or leave the Carry On gang, or just take a break for a film or two. Kenneth Williams was the actor who appeared in the most Carry On movies, but some of the other actors who regularly appeared included Joan Sims, Charles Hawtrey, Bill Maynard, Sidney James, Kenneth Connor, Peter Butterworth, Bernard Bresslaw, Hattie Jacques, Jim Dale, Peter Gilmore, and Barbara Windsor. And many others.

Each Carry On actor tended to specialize in a particular type of role. Thus Kenneth Williams would usually play a snide, haughty character who would easily be outraged, Joan Sims started out playing young and desirable women then moved to older and less-desirable women, Charles Hawtrey would be naive and effete, Sid James played lecherous, leering Cockneys (often named "Sid"), and so on.

Movie after movie would find a different situation to put these types in. Sometimes a normal everyday setting (a hospital setting was used four times), sometimes a well-known historical period or a parody of a specific film genre. Once in a while an actor would play different from their usual type, such as Kenneth Williams playing the Mayor in Carry On Cowboy with a Fake American accent instead of in the voice and style usually associated with Kenneth Williams.

Some say these movies have an important place in the history of British film comedy, others say they represent one of the lowest points of British comedy. Most say the series was uneven, with some films better than others, but there is little consensus on which are the best films.

The series relied heavily on one-liners, puns, and sexual innuendo. Gradually, as censorship standards for British films changed, the sexual humour came to be more explicit, until it seems to completely dominate the later movies; it was, after all, the age of the Awful British Sex Comedy.

These films are frequently shown on British television, only very rarely in the United States. This is probably due both to more stringent rules about sexual humour and nudity on American television, and also due to the very British quality of the humour.

There's a rather uncertain future for the film series. Despite the backlash from Carry On Columbus in 1992, a new Carry On movie, titled Carry On London/Carry On Bananas was announced in 2003, started pre-production in 2008, and didn't seem to be going anywhere after 2010, possibly due to the death of Gerald Thomas. Then in autumn 2015, it was announced during the Cannes Film Festival that Carry On Bananas would be back in the making, which was then followed by another announcement of a new movie the following year to be released in 2017 called Carry On Doctors. Who knows what else is soon to come.

Has nothing to do with the 1957 film Carry On Admiral (a.k.a. The Ship Was Loaded), that featured Joan Sims.

The complete list of films in the series is as follows:

Note that two of the films were originally released with titles that did not include the words "Carry On"; this was due to a change of film distributor. They were later known as Carry On Follow that Camel! and Carry On Don't Lose Your Head.

The Carry On film series provides examples from the following tropes: