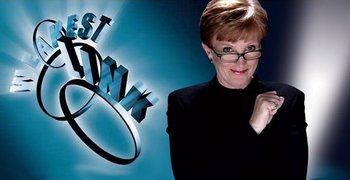 "You are the weakest link... goodbye!"
Advertisement:

Weakest Link (or The Weakest Link) is a British Game Show (2000-12) with multiple international versions, often with red haired female hosts who insult the contestants, blending a traditional trivia game with a Reality TV aspect of contestants voting each other off as they become a Dwindling Party until one remains and claims the game's earnings.

The show works as follows:

It made Anne Robinson very famous and gave her a reputation for nastiness as she took her tough, no-nonsense style (previously seen on consumer-affairs show Watchdog) to new levels. Her popularity made it so that she ended up hosting the American version on NBC; this version lasted a year. George Gray later helmed a syndicated version in the U.S. with its run time cut in half and the contestant pool reduced; it too lasted a year.

There have been numerous celebrity versions, where contestants compete to win money for charity.

The show ended in 2012 as Anne Robinson decided to step down and was not replaced; the final new episodes were quietly demoted to an early afternoon slot on BBC2, with Pointless taking over the prime teatime BBC1 slot. In 2017, it was announced that the show would be resurrected, first with a charity special in November with the intention of a full run in 2018, with Anne Robinson returning as host, although these plans were stalled for some time, with Anne taking over as host for Countdown instead. The show finally made its return to British TV in 2021 with planned celebrity editions and comedian Romesh Ranganathan taking over as host.

A new American version premiered on September 29, 2020, with Jane Lynch as host.

"Who's just yet another cliche thing to happen on a game show?"

"These tropes will go through to the next round. But one of you ... will not."

"Join us next time on the Weakest Link. Goodbye."
Feedback

A team of nine contestants on the Weakest Link manage to successfully reach and bank their Â£1000 target without ever getting a wrong answer.

A team of nine contestants on the Weakest Link manage to successfully reach and bank their Â£1000 target without ever getting a wrong answer.