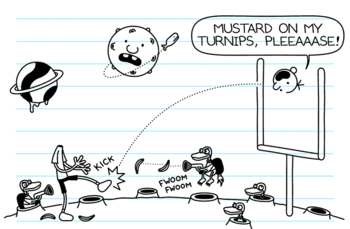 "Urn yanked at the lever that lowered the screw into the water. His eyes glowed almost as brightly as the lightning.
'Now there's a power', he said. 'Harnessing the lightning! The dream of mankind!'...
'Is it? It's not my dream', said Didactylos. 'I always dream of a giant carrot chasing me through a field of lobsters.'"
— Small Gods
Advertisement:

It can often be useful — or at least funny — to contrast the coherence of metaphorical or plot-driven dreams with "realistic" dreams that are far more bizarre.

When people actually dream, it doesn't make sense.note This is because even though the brain is fully active while asleep, it's operating without much guidance due to the fact that the body is placing more priority on simply decluttering the brain; additionally, in childhood, a great deal of neuroplasticity occurs during sleep, which can result in these new neural connections creating very odd, yet vivid thought patterns. A great deal of the surreal nature of most dreams are their non-linear and often completely nonsensical ordering, brought about partially as a result of the brain consolidating and calling upon memories in both the short term and long term to invent its own story. Dreams may have a narrative thread or sequence of some description, yet often what happens in each section is only tangential in relevance to what happened before, if not completely irrelevant altogether. Plus, the brain will fully or partially flush short-term memory upon waking, so what the person remembers after the fact is usually the juiciest bits. Things happen in random orders, for no good reason. Reality routinely shifts, unnoticed by the dreamer.note Unless they do. But even those who do notice the reality-shifts don't always think anything of them. Nevertheless, "dream" is an incredibly potent metaphor. We use "dream" to mean "aspiration", and "nightmare" to mean "fear". Fictional characters are also likely to have meaningful dreams of some variety — either because they may have a supernatural ability that gives them these dreams, or just because, due to the Law of Conservation of Detail , only their meaningful dreams are reported in the story.

All this means that most of the time, when fictional dreams are described, they're considerably more coherent than real dreams ever are. A savvy author may point this out by throwing in some dream elements that are just as weird as non-fictional dreams, either to contrast with the plot-relevant stuff or to disguise that it's there at all. Alternately, characters may be able to tell the difference between prophetic and regular dreams precisely because the prophetic kind are coherent.

In one common version of this, a character is put in a position where "their dreams will come true". Unfortunately, it's meant literally. So it means their life becomes strange and non-linear, not that all their deepest desires are suddenly satisfied. Similarly, some people may use this for Literalist Snarking when someone else says, "I'm Your Worst Nightmare."

This often involves Word-Salad Humor or, if it's a Nightmare Sequence, Word-Salad Horror. May also overlap with Surreal Humor or Surreal Horror. Other characters may dismiss a particularly trippy dream as an Acid Reflux Nightmare. May be the cause of a Waking Non Sequitur.