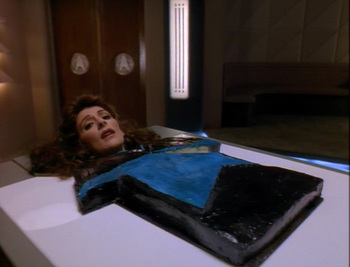 The kicker is that she's not even chocolate-flavored.
Advertisement:

While experimenting with his new program that allows him to dream, Data begins having disturbing nightmares. In one, he sees a gang of workmen disassembling part of the warp core, and when he tries to stop them, they attack him and tear him apart. In another, the crew of the Enterprise is devouring each other: Troi has been turned into a cake which Worf is eating, and Crusher is drinking Riker's blood through a straw. Worse, the nightmares start spilling over into waking life, culminating in a scene where he attacks Troi in a turbolift and stabs her in the shoulder.

Data is relieved of duty, but when Troi is brought to sickbay for treatment, Crusher discovers an "interphasic" alien parasite, invisible except in a special scanner, clinging to her shoulder in the exact place she was stabbed. Crusher goes on to discover that the same parasites are infecting all of the crew. Picard and Geordi hook Data up to the holodeck so they can see his nightmares for themselves, and they figure out that his subconscious detected the parasites and generated the nightmares to warn him. Using information gained from his dream, they're able to send out an interphasic pulse from a chip in Data's brain that hurts the parasites and chases them off the ship.