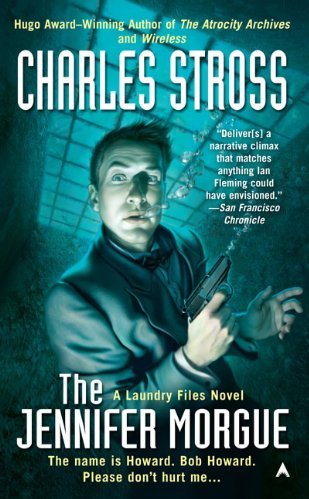 The Jennifer Morgue is the second novel in The Laundry Files by Charles Stross. The book also includes the Laundry short-story "Plimpf".

Bob Howard is the newest field agent for The Laundry, a top-secret government organization devoted to keeping the UK safe from magical threats, and preventing the public from learning that magic is real. With a background in IT, Bob is very much aware that working for a secret government agency—even one as unusual as The Laundry—is not as exciting as fiction might make you think. It's still a hidebound, bureaucratic government agency with endless paperwork.

His latest assignment, however, is starting to take some unusual turns. First, he's asked to meet with a foreign agent, Ramona Random, who turns out to be a serious Femme Fatale—and far more dangerous than she first appears. Next, he's sent to a beautiful Caribbean island to investigate a billionaire who lives on a former warship converted into a yacht—and who may be planning to take over the world.

It's all beginning to feel like something straight out of a James Bond film.