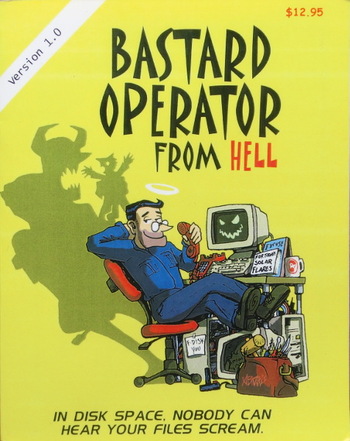 In disk space, nobody can hear your files scream.
Advertisement:

. First published in 1992, it is about a system administrator (who is also Travaglia's Author Avatar, given that the character's name is Simon the very few times any first name is used at all) that abuses his position to (a) inflict misery upon those around him and (b) advance his goals of getting more money, more alcohol, and less actual work. He accomplishes this through the use of a great many plans abusing his skill with electronics to great effect.

The first wave of stories took place with the title character as an administrator for an unnamed college campus. They were almost always revenge stories against clueless computer users that would either bug him about completely obvious computer problems or make demands for more disk quota, often with them acting hostile to him as they demand he fix their problems. He never does, though, usually getting them to do incredibly stupid things to their computers or just twisting their words around as he complicates their life. After a period of time, the setting was changed to a London corporation, the character was expanded to being a selfish asshole who manipulates those around him for self-profit, and he was given a sidekick with the "Pimply Faced Youth" (PFY).

Despite the fact that the title character really lives up to the name, he has become a bit of an icon of the computer networking subculture as the perpetrator of things that many an administrator only wishes he or she could get away with. Much of the appeal can probably be attributed to the fact that while most people in these positions have to smile and nod while the user yells at them over inconsequential things, this character instead gets revenge. He almost always wins through just sheer wit and skill, getting away with murder (often literally) as he manipulates events to progress his goals.

You can read all of Travaglia's work here