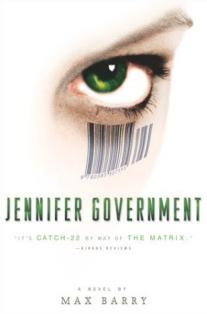 Jennifer Government is a 2003 novel by Max Barry about a Corporate Dystopia where the government is powerless. Set 20 Minutes into the Future, United States has become a globe-spanning corporate empire including the Americas (bar Cuba), the British Isles, South Africa, India, Japan, and Australia - a recent acquisition where most of the book takes place. A map provided in the book identifies some countries as "affiliates" and others as "socialist" and "fragmented markets." Government taxation and spending are things of the past, people take the surnames of their employer company, and the corporations are above the handful of laws they have allowed to remain.

The story begins when Corrupt Corporate Executive John Nike signs employee Hack Nike up for a new guerilla marketing scheme, killing a dozen customers that buy the latest model of their shoes to raise street cred. After Hack outsources the kill to NRA via the privatized police, the Government gets involved. The investigation is led by Jennifer Government, a single mother/secret agent who seems to have a personal stake in solving the case. Another story thread follows Hack's self-employed girlfriend, Violet (later Violet ExxonMobil) getting caught up in the war between US Alliance and Team Advantage, two "Customer Loyalty" programs that are effectively competing with each other and the government for control of the nation, and Hack getting involved with a group of anti-capitalist activists.

Meanwhile, in Texas, Billy Bechtel (Later Billy NRA) is laid off as Bechtel closes down their tank factory and he decides he wants to go skiing. Several misunderstandings later he is a part of John Nike's ultimate plan: to overthrow the government. We also follow stock trader Buy Mitsui, who is a bystander to the initial Nike shootings who ends up dating Jennifer.

Often compared with the dystopia novel 1984, Jennifer Government explores the opposite premise - a dystopia wherein the state has too little power, allowing the unchecked abuse of power by non-state actors. Taxation was abolished long ago, which one character points to as the beginning of serious problems since it removed people from any sort of investment in the larger society, and almost all government services (including law enforcement and road repair) have been privatized.note The usual first-world percentage of GDP tied up in government taxation and spending is 40-60%, the bulk of this going towards education and keeping citizens alive and well. Pre-modern/liberal/libertarian states which spent on the level of the USA in the book, such as the real-life USA in 1850 or Qing and Republican China, never mobilized more than 4% of GDP outside wartime. Such states sometimes find themselves unable to tax more money even when they want to and so have to resort to making/'printing' money even in peacetime. The Government only has the power to investigate crimes against private property and life, and only the funding to help those who can pay.