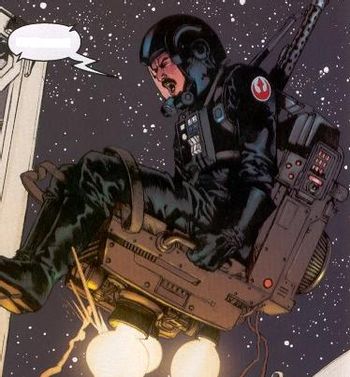 Q: Now this I'm particularly keen about of. You see the gear-lever here? Now if you take the top off, you'll find a little red button. Whatever you do, don't touch it.
James Bond: And why not?
Q: Because you'll release this section of the roof, and engage and fire the passenger ejector seat. Whoosh!
Bond: Ejector seat? You're joking!
Q: I never joke about my work, 007.
— Goldfinger
Advertisement:

An emergency device intended to allow the driver of a vehicle to escape if a devastating crash is inevitable. Any vehicle, that is — Space fighters, normal fighters, helicopters, giant mecha, submarines, secret agent super cars, and delivery vans are all likely to have an ejection seat installed. Usually triggered by a Big Red Button.

A Sub-Trope of Abandon Ship: rather than just getting the heck out of (the) Dodge, the seat is helping you out (the door). When the pilot nears the ground, he may find himself hanging from a Parachute in a Tree.