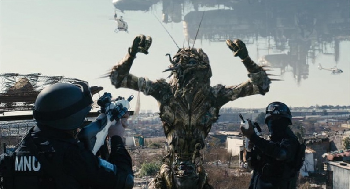 "Officer, you only pulled me over because I'm green!"
Chekov: We do believe that all planets have a sovereign claim to inalienable human rights.
Azetbur: Inalien. If only you could hear yourselves. Human rights. Why, the very name is racist. The Federation is no more than a Homo sapiens–only club.
— Star Trek VI: The Undiscovered Country
Advertisement:

An extra-terrestrial, a vampire, a mythical or magical being, or maybe even a half-human being or a person who transforms into a monster or has somehow gained superpowers runs the risk of being found out. If the general public discovers their true nature, they could be dissected in a lab or suffer some equally unpleasant fate. Mind you, as sapient beings who look (and possibly are) quite human, they still should enjoy some basic civil rights (even if they aren't documented citizens; most Minuteman Militia members don't suggest dissecting illegal aliens). However, this does not stop the government from wanting to imprison the being (without trial, naturally) and use them as subjects in endless (probably painful) experiments.

This means said being has to constantly run from the authorities as opposed to going to the nearest court and having a restraining order issued, or perhaps going to the media about it (this is especially jarring when the being can prove its claims), calling 911, or applying any of the myriad legal remedies that protect everyday people from what amounts to a metric buttload of civil rights violations and outright felonies committed against their person. Somehow, none of the "normal people" notice, and likely wouldn't care if they knew.

The pursuers, who have the power of the FBI, CIA, or even the Postal Service (hey... don't sneer at the Post Office — the Postal Inspector's office is the only law enforcement arm of any government in the US with a perfect 100% conviction rate) behind them, never seem to realize that they could be arrested for their treatment of the being, losing their careers, reputations, and freedom because of it.

Technically, extra-terrestrials, mermaids and other such beings aren't human, granted, so this might explain why they don't use any legal recourse.

This technicality does not cover humans who have gained powers, however. Having the ability to fly does not make you non-human. Neither does being in the wrong time or from an Alternate Universe. Those are all still human beings, and people in any court of law.

Likewise, humans who are legally dead still have rights, as nothing in the law restrict rights to only living people. In reality, dead humans still have property rights, that is to say, their estate, although someone else is needed to manage and dissolve it. The dead would presumably have other rights or protections under the law if they asked for them. And while death legally means cessation of brain activity, which vampires may not have, no doctor is going to declare someone dead when they're moving around and talking, so they probably aren't even 'legally dead' in the first place. Zombies and other non-sentient undead on the other hand, might indeed be brain dead, and a doctor might be willing to declare them so. Either way, it's not like a zombie is going to be demanding their rights be recognized. (Or demanding much more than "Braaains!!!").

It is worth noticing that "people" have rights, not "humans" (not that this isn't rocky territory). So if a writer wished to ignore the issue, they can mention that courts declared them "people", no need to rewrite any laws or constitutions at all. This isn't all that great a stretch, as Real Life courts have ruled that such bodies as governments, civic organizations and corporations can be recognized as 'persons' so that they can be legally represented and/or sued in criminal/civil cases.

Note that this trope is only valid for places in which there are civil rights for humans to begin with. A perfectly ordinary human would have to escape a tyrannical government that was persecuting him as much as any mermaid or vampire.

Of course, as many Real Life events have demonstrated to the world, even places with great (though rarely unassailable

) reputations for upholding human rights for their own citizens, can and have blatantly ignored said rights when it suits. So maybe the writers really are on to something.

A subtrope of Fantastic Legal Weirdness, What Measure Is a Non-Human?, and usuallynote Obviously, legal problems are easily fixed, but often no one ever bothers or sometimes even wants to do it. Hollywood Law. Overlaps with They Would Cut You Up. See also Zombie Advocate, when a character advocates for the rights of non-humans. Contrast with Undead Tax Exemption, where the issue is usually handwaved as the non-human easily creating a convincing fake identity.