Recap / Buffy the Vampire Slayer S1E8 "I Robot, You Jane"

"I know our ways are strange to you but soon you will join us in the twentieth century. With three whole years to spare!"
—Jenny Calendar 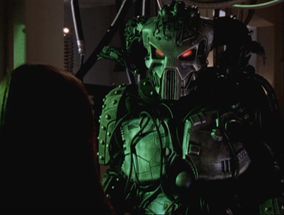 Corona, Italy. 1418. In a castle, a young Italian man named Carlo looks at a lizard-looking demon named Moloch, who promises Carlo to give him everything he wants as long as Carlo gives him his love. As Carlos promises this very thing, Moloch kills him. In a church not far, a group of priests form the sacred Circles of Kayless to trap Moloch in a book. The book is sealed in a box with the head priest expressing his hope that the box will never be opened or Moloch will walk the Earth again.

The scene cuts to present day with Buffy opening the very box the book was sealed in at the Sunnydale Library. She's told by Giles to put the book in the pile. Ms. Calendar and Giles trade jibes about the need for modern technology: Giles preferring the older fashioned method of book research whilst Ms. Calendar opts for the use of the internet. As the class leaves, Willow tries to convince Xander to stay and help her scan. He declines and as he leaves, Willow scans the book Moloch is trapped in. As she leaves, the words 'Where am I?' come up on the computer screen.

A week later, Buffy questions Willow about her skipping a few classes as this was out of Willow's character. Willow confides that she is in an online relationship with boy named Malcolm. Buffy warns Willow of the dangers of getting into relationships with people she's never met before. As she does so, Fritz, one of the class computer geeks, is instructed to keep a watch on Buffy by Moloch, who is talking to him via his computer. Ms. Calendar questions Fritz and one of his friends about the abnormal amount of time they have been spending on the computers and receives an ambigious response. Later, when Xander asks Willow if she'd like to go to the Bronze with him, she declines as she wishes to talk to Malcolm online.

Buffy accuses Xander of being jealous which he adamantly denies, stating he's just worried for Willow. The scene cuts to Fritz who says "I'm jacked in" and scars himself with the letter M. Willow is late to her classes the following day and Buffy assumes it's because she's been up late talking to 'Malcolm'. When Buffy asks another computer classmate, Dave if he can help her find out Malcolm's real identity, he angrily blows her off. This causes Buffy to think Dave is actually Malcolm. When Buffy goes to Giles for help, he admits that he can't be much use as he finds technology intimidating. His only idea is for Buffy to follow Dave. As Buffy is following Dave around the CRD building, a security camera follows her. A message appears on a computer screen. Fritz is sat in front of it and reads "Kill her".

When Buffy goes back to Xander and Giles with her findings, Xander unexpectedly knows that CRD stands for Calax Research and Development, a hi-tech company which had shut down. When Xander assures Buffy that he'd know if CDR had re-opened and is therefore suspicious. They decide to break in. When Ms. Calendar interrupt them, Xander and Buffy leave. Willow becomes suspicious of Malcolm after she learns that he's aware of her expulsion from her previous school and logs out of the conversation. Back at the library, Giles and Ms Calendar's verbal sparring leads them to discover that Moloch's book is empty.

Outside of school, Dave tells Buffy that Willow wishes to speak with her in the girl's locker room as a plot to electrocute Buffy. At the last moment, he changes his mind and along with Buffy's Slayer reflexes, his warning saves her. When Moloch hears of Dave's change of heart, he begins writing Dave's suicide note on the computer and gets Fritz to kill Dave. Buffy, Xander and Giles meet up again in the library. Giles informs them of the times when demons were trapped inside books and were only set free if someone read the book. Together, they realise that Moloch has been set free into the internet; scanning being close enough to being "read". When Buffy tries to delete the 'Moloch' file, his face appears on the screen and tells her to stay away from Willow. It then clicks that Malcolm is actually Moloch.

Giles explains that with the demon in the internet, there's no limit to the damage it could do. They decide to get Ms Calendar's help and believe that her knowledge in technology and Giles' in demons, they can work together to re-imprison Moloch. After finding Dave's body, Buffy and Xander go to Willow's house where they discover she's been kidnapped by Fritz.At the library, Giles is surprised to learn that Ms Calendar understands the demonic side of the Hellmouth and that she identifies as a "techno-Pagan". Buffy and Xander rush to the CRD as they believe Moloch had Willow kidnapped. Buffy calls Giles to co-ordinate plans.

Inside the CRD, Moloch's robotic body is assembled and he is happy to see Willow. Moloch kills Fritz as a demonstration of his power. Buffy and Xander break into the CRD as Giles and Ms Calendar prepare a binding spell. The binding spell doesn't complete but it's enough to bring Moloch out of the internet and trap him inside his robotic body. Moloch crashes through a wall and backhands Xander. Willow hits him with a fire extinguisher. As Moloch tries to kill Buffy, he punches through an electrical power line and dies.

The next day, Buffy, Willow and Xander joke about how the Hellmouth is screwing with their love lives and laugh about how none of them will ever find true happiness. They then look decidedly unenthusiastic about the prospect.