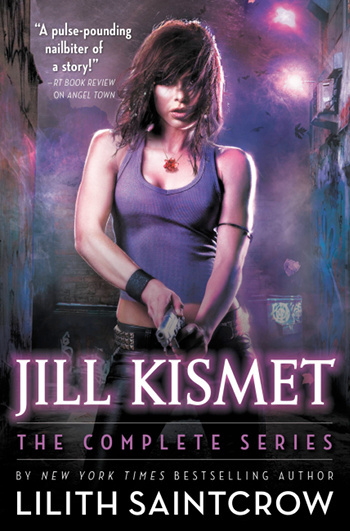 "Judge, jury, executioner. Just like you, you fucking Sorrows bitch. There's just one difference, Inez. I'm a hunter. I am the fucking law in this town, bitch. Sentence pronounced."
"Thou Who hast given me to fight evil, protect me. Keep me from harm. Grant me strength in battle, honor in living, and a quick clean death when my time comes. Cover me with Thy shield, and with my sword may Thy righteousness be brought to earth, to keep Thy children safe. Let me be the defense of the weak and the protector of the innocent, the righter of wrongs and the giver of charity. In Thy name and with Thy blessing, I go forth to cleanse the night."
— the Hunter's Prayer
Advertisement:

A streetwalker who killed her pimp in self-defense, Jill Kismet was taken in by Mikhail Tolstoi, a hunter of supernatural creatures, who apprenticed her to be a hunter herself, working the seedy supernatural underbelly of the American West. Trained in martial arts, whipwork, knives, firearms, and minor magics, she emerged with work she could be proud of. Just one problem: she made a pact with a hellbreed for greater fighting power.

And then Mikhail was murdered.

Six months later, when Night Shift begins, Jill is now the only hunter in town, working with the city police on supernatural crimes. The latest item in the docket? The gruesome vivisection of five cops in a single night by a furry creature helped by a hellbreed.

Advertisement:
An omnibus edition (pictured) was published in 2013.