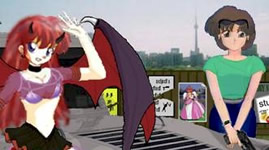 Well, this is new.
Advertisement:

) by Sunshine Temple is ostensibly a Ranma ½/Sailor Moon Crossover fic throwing Ranma and the Senshi into the world of secret government agencies, ancient conspiracies and Eldritch Abominations. It is very much of the Darker and Edgier school of fanworks.

The cast of Ranma bear little resemblance to their canon selves beyond names and a few surface similarities; even Ranma's curse doesn't last long. The Senshi fare somewhat better. However it works as its own original story, and no previous knowledge of the original series is required, though it might help.

The story begins when Pluto seeks to replace a suddenly dead Tuxedo Mask with the nearest available candidate for Prince of Earth, Ranma Saotome. Unfortunately Ranma's curse activates in the middle of the rite, and what Pluto gets is a very female Succubus Princess of Earth, Sailor Darkstar. Predictably, Ranma is less than thrilled by this turn of events. Shortly afterward he is recruited into a shadowy organization by secret agent Tendo, Kasumi Tendo, kicking off a twisting tale which may lead Ranma and the Senshi to save the world. Or destroy it.

Imagine Torchwood meets The X-Files, with a dash of Being Human.

Currently The Return clocks in at a hair under three quarters of a million words across 38 chapters. It was started in 2002 and is currently active, if slow updating. The author is presently working on a side story called Blood Debts

- a side story crossover with the Dresden Files that promises to reach about 200k words upon completion.

By the same author is And If That Don't Work?, a Evangelion alt-fic which does much the same thing with that franchise.