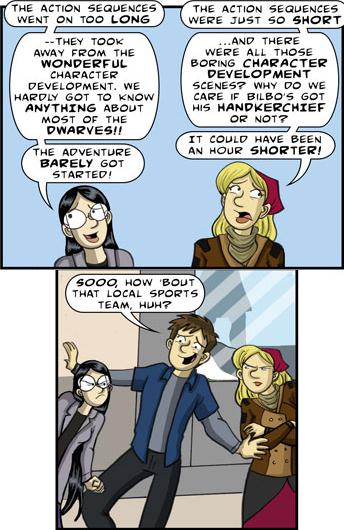 "The only question I
Ever thought was hard
Is 'Do I like Kirk
Or do I like Picard?'"
— "Weird Al" Yankovic, "White and Nerdy"
Advertisement:

A Broken Base is a civil war among fans of a particular franchise. Almost every franchise has at least some internal conflict among its fanbase, but a truly broken base is characterized by a sustained and exceptionally vicious conflict between two or more large, vocal, and entrenched factions with little or no middle ground to be found between them.

Common causes of a broken base include shipping wars, a large and vocal Periphery Demographic whose priorities are at odds with the main demographic, or a divisive character, sequel, adaptation or remake.

Contrast Fandom Heresy for a fandom opinion that is near-unanimous to the point where it tends to silence any dissent.

When adding examples, please keep in mind that all four of the following criteria must be met to qualify. Minor disagreements don't count.

Also, be careful when adding examples along the line of "Is this racist/xenophobic/sexist/anti-LGBTQ+, or are people just overreacting?" These examples are often used to accuse a work of being bigoted while bypassing Unfortunate Implications' requirement for a reliable source.

The correct answer is The Sisko.
No, Janeway!
*sigh* Here We Go Again!
But what about Archer?
You mean Archer? Or that Archer?
Whatever! The point is, Chris Pine's Kirk is clearly the superior Kirk!
*Chirping Crickets*
Get him!