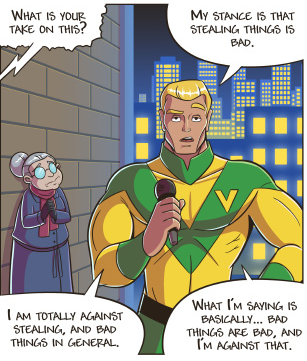 I believe that captions are useful and wordcruft is bad.
Simon Skinner: I'm simply suggesting that young Peter be given a second chance, before he becomes just another crime statistic. I'm sure he's going to learn a valuable lesson.
Sgt. Tony: Stealing biscuits is... wrong?
— Hot Fuzz
Advertisement:

Friends, there comes a time in everyone's life when they can no longer sit quietly and say nothing. Sometimes, a man's got to take a moral stand, even though it may not be popular and even though it might get him into trouble. Today, my friends, is that day. I won't stay silent any longer.

I believe that cancer is bad.

This is a trope for when characters are treated as brave revolutionaries by the other characters in the work for stating the obvious: that Eyepatch Q. Blackheart is a bad man, that the Nazis were evil, that cancer is bad, etc. Can also apply to situations or things instead of people. The important part of the trope is the reaction of others. This isn't about the work's moral message, it's about a character being treated as brave for making statements that are completely in line with the majority opinion around him.

Obviously there's Truth in Television here. Values Dissonance can sometimes result in this, if the Aesop really was revolutionary and controversial for its time/place. Also, some Aesops are uncontroversial when spoken as a plain statement, but have an implicit, less-widely-agreed-to message, such as "We're not yet doing enough about this." For example, it's easy to say "Bigotry is bad", but programs designed to help disadvantaged minorities, like affirmative action and hate crime legislation, are polarizing political issues with no clear right or wrong answers. "Wars are bad" is an uncontroversial message, but "this particular war is bad and we should stop fighting it" will likely lead to accusations of treason. Not to mention that even the most moral of people can get burnt out on idealism and start resenting the people they're still supposed to help as whiners and nuisances - and therefore, might have to learn to be compassionate all over again, or at least have their initial altruism reinforced. And, of course, Tropes Are Tools; while no one might be arguing in favor of people getting cancer, a story that points out that cancer is bad is still not wrong to do so, and can still be moving if it effectively shows why cancer is bad.

This trope is Played for Laughs quite often, hence why so many of these examples are parodies, but straight examples are still fairly common. This may lead to an Anvilicious moral.

Compare Anvilicious, And That's Terrible, Stock Aesops, Broken Aesop, and Drugs Are Bad. Contrast Hard Truth Aesop. Also contrast with Lost Aesop, when the story seems forget that it was trying to give a moral. See also Windmill Crusader, where a character takes a stand against a non-existent problem. Can sometimes overlap with Clueless Aesop, where a story attempts to give a moral but misunderstands/misapplies it or simply isn't in a good position to give it anyway.

Sister Trope to Captain Obvious Reveal, when the characters are astonished by a twist the audience can totally see coming.