Webcomic / So... You're a Cartoonist? 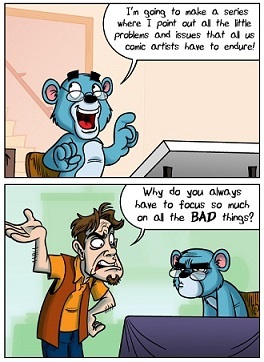 Portrait of the artist as a young bear.
Advertisement:

is a webcomic started by Tom Preston (real name Andrew Dobson) in 2011. SYAC is a comedic autobiographical comic about Tom Preston’s life as an unemployed cartoonist and the challenges he faces day-to-day both on and off net.

Until June 2015, SYAC was available on Dobson's website and DeviantArt page. From 2015 to 2017, it was updated only on his website. In 2017, the comic went on hiatus, and many strips were deleted. Some strips have survived, thanks to blogs discussing Dobson's work.

So... You're a Cartoonist? provides examples of: