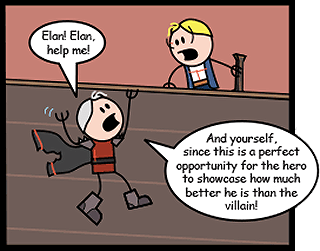 "This is the bizarre thing about being a superhero — you've even got to save the bad guys."
— Captain Planet, Captain Planet and the Planeteers
Advertisement:

The hero and bad guy have had a big fight on the top of a building, which has resulted in the bad guy being knocked over the edge. He hangs there by his fingers, helplessly.

The hero is then motivated (or, more cynically, contractually obliged) to attempt to save the villain's life, even putting himself in mortal danger in the attempt. This is presumably done so that the hero can be shown once again to be noble and just. Maybe they feel sympathy for the villain in question due to some past connection they may have had. Sometimes they may strongly wrestle with the notion; the temptation is not just to let him die, but consider himself blameless for not directly causing the death. If no one will realize that the hero could have saved him, What You Are in the Dark may come into play. While some heroes take the philosophy of If You Kill Him, You Will Be Just Like Him! very seriously, many take it even further, thinking that letting someone die via inaction on their part is almost as bad.

A notable part of this trope is that, often, the villain refuses the hero's help because he can't bear owing his life to the hero, or would rather cause his own death, presumably out of ego or "honor".

Sometimes this happens when the villain is facing a cruel fate at the hands of a greater evil who disgusts the hero even more, leading him to shout "Even he doesn't deserve that!" or something of the type. If the villain does accept the hero's help — even if they begged for it — more often than not, they will be complete ingrates and keep trying to kill the hero, sometimes even immediately. In fact, sometimes the villain will use the opportunity to try to kill the hero — leaving both the hero and villain in mortal danger. This generally results in Karmic Death. Other times, the villain may be utterly bewildered as to why anyone would try to save an enemy.

On other occasions, the villain will continue pursuing their overall evil goal, but will now refuse to harm the hero out of grudging recognition of their debt. They may even return the life-saving favor at a later point, although this may wipe the slate clean in their eyes (saying that they're "even" at that point) and make it okay for them to resume their attempts on the hero's life.

In between, the hero may say Think Nothing of It in the knowledge that the villain will indeed think nothing of it. On the villain part, a more upright antagonist (usually an Anti-Villain) may leave the hero be for the moment but warn him explicitly that "it doesn't change anything!" In the worst of cases, the villain turns out to be an Ungrateful Bastard which leaves the hero (and the viewers) wondering why he bothered. Some villains (mostly Card Carrying Villains) even use things like this as "proof" that Good Is Dumb.

In more serious situations, the hero may be unable to save the villain's life but will still not let them suffer Dying Alone.

Usually a moment of Genre Savvy (with just a touch of Lampshade Hanging); the heroes are fully aware that this is the ugliest part of their job. An Anti-Hero may specifically not do this, just to emphasize their difference from a "true" hero. On the other hand, if a character whose position was formally on the villain/Anti-Hero fence does this, it can establish them as less of a villain.

See also Sword over Head, where the hero saves the villain by not doing anything, and Villains Want Mercy, where the villain begs for this trope. Contrast Villainous Rescue, which is the opposite situation. Heavily contrasts Refuse to Rescue the Disliked seeing if the villains too despicable to save. When this is combined with a chance to repent, it's also a Last-Second Chance.

Subtrope of Save the Jerk.