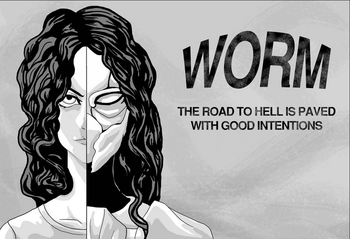 to an official cover.
Doing the wrong things for the right reasons.
Advertisement:

by John McCrae, a.k.a. Wildbow, is a Web Serial Novel centered around Taylor Hebert, a teenager with a superpower enabling her to control bugs.

Worm takes place in an alternate universe known as "Earth Bet". The history of Earth Bet very closely resembles that of our own Earth, but things rather drastically changed when a naked man with golden skin, going by the name "Scion", was suddenly found hovering in the middle of the Atlantic Ocean in 1982. Following Scion's appearance, a fraction of the human population found themselves suddenly gaining superpowers, usually a result of being faced with an extraordinary traumatic and stressful event in their lives; these incidents became known as "trigger events" and the superpowered people that resulted from them became formally known as "parahumans", informally as "capes". In the beginning, the sudden influx of these parahumans gave birth to the brief era that became known as the "Golden Age of Heroism", as many of them started using their powers in name of public good and helping people. But in the late 1980s and early 1990s, this Golden Age gradually faded out, as a growing number of the parahumans instead started using their powers to commit crimes, something which presented an increasingly serious challenge to the parahumans who stayed on the path of heroism. In addition, the growth of the superpowered criminal element and the brutality of their crimes, resulted in widespread concern and discontent amongst the regular human population, resulting in several of the world's governments founding agencies to counter parahuman criminals.

Things would, however, seriously change again in 1992, with the sudden arrival of the "Endbringers"; giant monsters with cataclysmic powers. The activities of the Endbringers lead to serious destruction, causing the loss of millions of lives, as well as catastrophic and irreversible economic and geographic damage. As the powers of parahumans are desperately needed in the attempt to beat back the Endbringers and limit the damage they can do, the agencies meant to police the supervillains are forced to grant them varying degrees of leniency in return for their assistance in combating the threat.

The story follows Taylor as she quickly gets swept up in the chaos and complexities of the "cape" community of Brockton Bay by joining with a group of villains known as the Undersiders. Cape politics, factions, rivalries, information warfare, and the individual problems of the people beneath the costumes put even the heroes in something of a gray area. Taylor's actions in the midst of this leave her in a situation where she's forced to make some hard choices, facing the reality of having to do the wrong things for the right reasons.

Bullying has also been featured as a major element in the plot and character development of the main character. Over the first few plot arcs, though, the story shifts away from the hellish landscape that is contemporary high school towards the more uplifting setting of a bombed out city at the mercy of a roving band of psychopaths.

Worm launched in June 2011 and updated regularly on Tuesdays and Saturdays (and some Thursdays) until the final chapter was posted in November 2013. The story has earned much praise

, with reviewers citing the creativity of individual powers, flow of writing, detail and action scenes as selling points of the work. In the blog post discussing the completion of the story,

the author has expressed intent to re-edit the story and try to get it published.

Something of a bonus feature, if you're into story analysis, is the staggering amount of stuff in the comments to each episode. They span from meta-analysis, wild mass guessing from spot on to crackpot, Dark Comedy, to short stories in their own right. Since it's all jumbled up and not indexed, Archive Panic does not even begin to describe it.

Worm has several character sheets for the tropes applying to specific characters. A memes page can be found here.

Soon after Worm's conclusion in November 2013, Wildbow began a second serial, Pact. He eventually returned to the Wormverse with a interquel known as Glow-Worm, beginning on October 21, 2017, before starting the proper sequel Ward, on November 11, 2017.

Not to Be Confused with Team17's Turn-Based Strategy game about warfare earthworms.

In the grand tradition of the internet, the novel has its own Wiki

Spoiler Warning: Worm is heavy on Wham Episodes, and has a fast moving Godzilla Threshold. Both this and the cast page are heavily masked by spoiler tape; WMG, Quotes, and the Moment pages (Funny, Heartwarming, Awesome, Nightmare Fuel and Tearjerker) are not. Open them at your own risk.