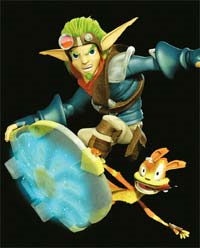 Skateboards IN THE FUTURE!
Ulrich: Whoa, how does Odd manage to pilot this thing?
Aelita: [shrugs] He's not afraid of falling...
— Code Lyoko, "Bad Connection"
Advertisement:

A Sub-Trope of Cool Board, the main recreational device in the future is the Hover Board. Like an all-terrain skateboard, the hoverboard is totally awesome and likely gained popularity with the movie Back to the Future Part II. Many Speculative Fiction series set 20 minutes or further into the future will have these things fly through the streets. Or even through the air, when it really shouldn't because that's when it stops being hovering and starts being Sky Surfing.

The characteristic that differentiates a hoverboard and Sky Surfing is the altitude range each has. A hoverboard generally has to stay within a certain distance of the ground (though jumping and gliding are acceptable) and can't gain altitude. In Sky Surfing, the vehicle can fly in any direction.

May be accompanied by hover bikes, scooters, and skates as well. Hoverboards are very, very popular in Video Games. Usually a large part of the gameplay in a futuristic platformer involves riding and acquiring these vehicles, although they're just as likely to be temporary power-ups.

Not to be confused with self-balancing scooters,

which are also called hoverboards. Those only work on the ground.