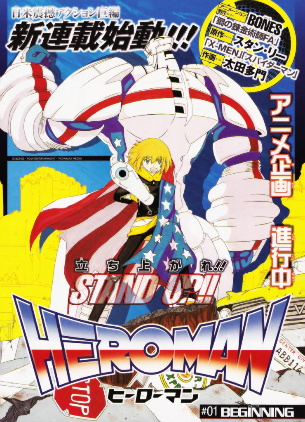 Imagine if, instead of getting bitten by a radioactive spider, Peter Parker acquired the controls for Giant Robo. note Other than Japanese Spider-Man, of course.

Heroman, which debuted in spring 2010, is the result of Stan Lee working with Bones to create a manga and anime that can best be described as Giant Robo meets The Big Guy and Rusty the Boy Robot IN AMERICA!. Generic American Joey Jones lives in Los Angeles, California Center City, West Coast USA. It's 20 Minutes into the Future, as humanoid robotics are the rage for those who have the money to buy them. Joey is not one of these people, and works as a part-order cook when not getting pushed around by The Bully. Joey is pretty much accepting the modern ennui of having no power in life; when a number of surprising things happen.

Now has a character sheet in need of tropes.

You can read an entertaining recap blog here.

Some of these include: