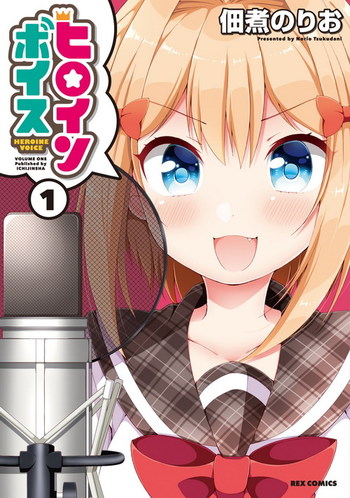 Otome at the microphone.
Advertisement:

Otome Yamada is a high school student with a very unusual-sounding voice. Others think she should be in an anime, though the closest she's ever gotten to performing is in the role of a stagehand. And Suzu Ayase is a disgraced former Idol Singer and voice actor for an anime tie-in who decided to stay out of the limelight afterward.

Together, they... well, it doesn't work like that. But after Otome suddenly winds up in an anime recording studio (she thought she was at a try-out for a stage performance of Cinderella) and impresses the resident employees with her voice, she ends up working there. She eventually strives to be the best heroine while in cahoots with Suzu. And so it is for Heroine Voice, from Norio Tsukudani, the mangaka behind Himegoto.

The manga ran for ten chapters in Comic Rex from 2015 to 2016...but immediately stopped after that. Neither Norio nor anyone who behind the scenes ever said what happened, though it's possible for it to have been cancelled due to poor sales... or perhaps she got bored with it. note Yes, it is a she. Norio is just a pen name. If you thought about who else has it, you might be clued in.