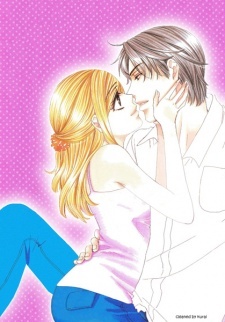 Our heroine and her new husband.
Advertisement:

Chiwa Takanashi is an average 23-year-old office clerk working for the powerful Mamiya company. Unlike her workmates, she despises men and it's been ages since she had a boyfriend: the reason is she works as a club hostess at night to pay for her father's debts. One day at her night job, a handsome but rude costumer throws a tantrum that causes her to get fired; the next day she's called in by the Mamiya Company president... and she discovers the client was Hokuto Mamiya, the young president of the company, who's been engaged to her by his grandfather... Unable to pay her father's debts, Chiwa doesn't have a chance to refuse, even if she'll only know about her husband's real personality after marrying him.

Happy Marriage?! (Hapi Mari) is a josei manga by Maki Enjouji (who also wrote Private Prince) It was serialized in Shogakugan's Petit Comic from 2009 to 2012, spawning a total of 10 volumes. The series was licensed in USA by Viz Media, France by Kazé and Germany by Tokyopop.