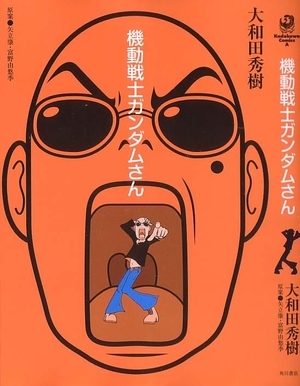 "Who the hell do you think I am? I'm the director of Gundam!"
"A franchise has to be established for at least as long as Gundam has been for anybody to even consider fictionalizing the story of its own creation. In the case of Gundam Sousei, it is to the story of Gundam's production what Sengoku Basara is to the Warring States period."
— David Cabrera

Every franchise has its humble beginnings, and the Gundam franchise is no exception. Gundam Souseinote Gundam Genesis is a manga first launched in March of 2009 retelling of Gundam's rise from obscurity into the legendary franchise it has become today. Sounds pretty simple and boring, right? WRONG.

Written and illustrated by Hideki Owada, the author of the Affectionate Parody gag series Gundam-san, Gundam Sousei takes the creative staff (and a few of the voice actors) of Mobile Suit Gundam and cranks up their quirks and personalities to insane levels. Director Yoshiyuki Tomino is a chain-smoking, shades-sporting badass, Sunrise's program director is New Meat Moe, the character designer is a Bishounen, the mechanical designer is a grease monkey who draws on the side, the list goes on. If the person was involved in the creation of Gundam, they will be exaggerated. And Hilarity Ensues. While most of the story focuses on how outrageous Tomino is, the manga does take time out to show off some of the weird and peculiar facts surrounding the early years of Gundam that may have fallen to the sands of time.

The manga completed on New Years Day 2011 with 2 volumes and 25 chapters.

It should also be noted that this whole manga is a work of fiction, with no connection to the real people.