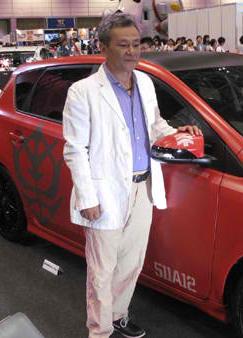 With the MS-186H-CH "Auris Char Aznable" Toyota made in his honor. note Whether it also runs three times faster is another question.
Advertisement:

Shuichi Ikeda... HE IS A CHAAAAAAR!!!

This is how most anime fans know Shuichi Ikeda (born December 2, 1949), as the notorious Char Aznable of Mobile Suit Gundam, whose subsequent roles eventually had Char references that he even accepted, with some reluctance. He was once married to Keiko Toda of Anpanman fame, but later married Sakiko Tamagawa. He's also the official dub actor for Jet Li.

Here he is in GPS form.