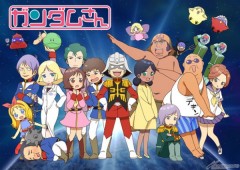 Kidō Senshi Gundam-san (Mobile Suit Gundam-san) is an ongoing Yonkoma series featuring Amuro, Lalah, Char, and other characters from the first Gundam series... But probably not quite as you remember them. Written and illustrated by Hideki Owada (of Gundam Sousei and The Legend of Koizumi fame), you may never watch Mobile Suit Gundam the same way again.