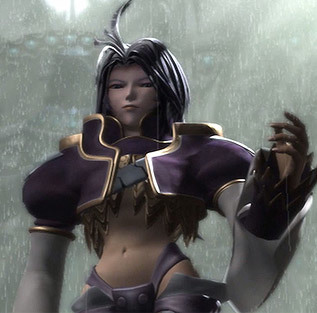 Hey everyone, it's time to play "Guy or Girl?".note In this case, despite feminine looks, guy.
Snake: [Yoshi] lays eggs and throws them, right? …then it must be female.
Otacon: ...actually, it's a "he". At least, that's what it says.
— Snake's Codec conversation on Yoshi, Super Smash Bros. Brawl
Advertisement:

You have been watching this series for a while, be it since childhood or since yesterday. You are just in the middle of an exciting scene where Miss Lovecuddles reveals that she was actually behind everything that… wait a minute, Mister? Lovecuddles is a guy?

Sometimes this is because a cheap dub uses badly Cross-Dressing Voices, sometimes because the language you're enjoying your story in doesn't have gender differentiated pronouns, or because they have a name rarely used for that gender, or it was clear from the beginning and you were just holding the Idiot Ball for the day and missed it fabulously.

Compare She's a Man in Japan (where the character's gender actually was changed while adapting), Bifauxnen, Samus Is a Girl, Alien Gender Confusion (where this happens in-universe to members of different species), Female Monster Surprise (where you are expected to be mistaken at first) and Ambiguous Gender Identity (where the character's sex is (probably) known but their gender isn't). Contrast (or compare?) Dude Looks Like a Lady or Lady Looks Like a Dude when it's other characters who are confused.

See also Ambiguous Gender for characters who have no canonically stated gender, and Viewer Species Confusion for when it happens to an animal or other non-human character. May be solved with the use (or lack) of Tertiary Sexual Characteristics. Can be seen as the viewer-perspective version of Unsettling Gender Reveal. Anything that makes the character's sex obvious may act as a Gender Reveal. Can overlap with Viewer Name Confusion.