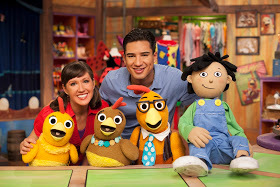 The Chica Show is an American live-action animated children's television series based on thepuppetry segments from The Sunny Side Up Show on Universal Kids, but features Chica going on episodic live-action and animated adventures rather than the traditional continuity of said programming block. It premiered on November 24, 2012 on Sprout.