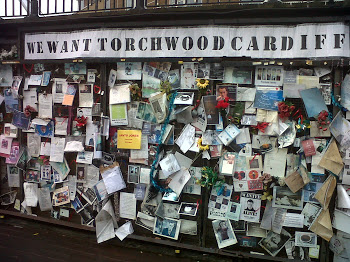 Some character deaths come and go. Others can have so much impact that fans erect a shrine which becomes a permanent attraction in Wales.
"No man should have to outlive his fictional wizard! No man!"
— Homer Simpson, The Simpsons, "The Haw-Hawed Couple"
Advertisement:

Fans can be a strange lot. They get really invested in the show they are watching, they come to empathise with and care for the characters. They come to see them as friends. Sometimes this gets taken to a strange place.

When a fictional character dies, there is often a very emotional response. In fact it can often lead to the sorts of public displays of affection that we might expect for a major public figure. In certain cases, Shipping will play a big part in this situation. A One True Pairing will be dashed because of a character's death, and the fan outcry will go Up to Eleven.

This can either be a sign of a great writer, or a terrible one. Likewise, it can be the sign of a touching viewer following, or a fanatical one. Or perhaps both. Either the death struck a chord deep and meaningful or the fans become enraged. In any case, sometimes it almost seems to border on Daydream Believer with how "real" the character's death feels. A denial is called He's Just Hiding!.

As this trope is about reactions to character deaths, here be spoilers.