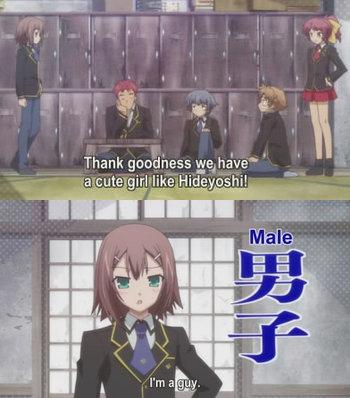 Were the hair clips not enough of a clue?
Advertisement:

A Gender Reveal occurs when a character's true gender is revealed, either to the audience or in-universe to other characters. The gender could be hidden completely or appear to be the opposite to their true gender, revealed to the audience, or known by the audience and revealed in-universe to characters. Reasons for the confusion range from intentional on the character's part to just having a naturally misleading appearance. Situations with Crossdressing and Gender Bending are particularly prone to including gender reveals for obvious reasons.

This index covers all instances of one gender mistaken for another gender. Examples belong on the appropriate trope. Note that not all of these tropes necessarily involve a Gender Reveal, just that they are places one is likely to occur.

Applies to all genders