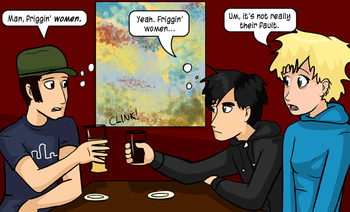 It's the classic lament of men and women everywhere, when frustrated in their dealings with the opposite sex. Unable to express their feelings in any other way, one member of a gender expresses their annoyance at every member of another gender with either a single word, or a sentence that groups all members of the gender together.

A standard sentence is, "Women. Can't live with them, can't live without them", which is often mocked or subverted, as with the page quote.

A Gender and Sexuality Trope and Stock Phrase.

This is, of course, almost always said out of emotional frustration, as anyone thinking about the matter rationally would, of course, admit that it's really not fair to group everyone together by a gender as if they're all that difficult to deal with. Be wary of anyone who says it and actually means it.