Rage Against the Heavens 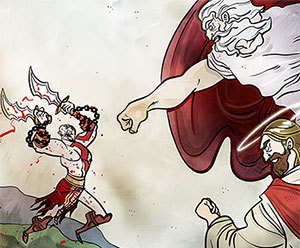 .note That's actually not how it ended up turning out, but it's still a valid imagination exercise.
"God, if the world really goes by your rules, then I'm gonna smash that illusion apart!"
— Touma Kamijou, A Certain Magical Index
Advertisement:

A character musters their courage to confront the supernatural being they believe responsible for their torment. No, it's not The Legions of Hell but the gods, or angels or even the Big Man Upstairs. This character has a beef with the Powers That Be who are running the show, and the capacity to do something about it.

It could be that the Cosmic Plaything has had enough and shouts Who's Laughing Now? It could be someone who believes they can do a better job being God. It could be that God is a jerk or even out and out evil. It could be something as complicated as the higher planes of existence being revealed to be run like a mad, hopelessly bureaucratic corporation — too concerned with rules and regulations to give a damn about the helpless mortals stuck in the middle, or staffed by bumblers who keep screwing things up by accident. It could also be something as simple as revenge or, even simpler, a search for a good fight.

This trope is more controversial than merely challenging Satan or going To Hell and Back. That makes it a prime target for authors who want to make their latest work Darker and Edgier. Many Moral Guardians and Media Watchdogs view it in a negative light, which makes it even more suited for this purpose. It's a full inversion of conventional morality and in some cases proposing that God Is Evil (the Gnostics' position). The only way to go further in this direction is to declare that Satan Is Good. It is also somewhat common in Rational Fiction.

The Other Wiki calls this misotheism

— hatred of God or the Gods. Not to be confused with atheism itself, the difference being that with misotheism, you believe there is a God (or gods), but you hate Him/them.

Often used alongside Heaven Above, where a Rage Against The Heavens is visualized by having a character rant at the clouds as if God was hiding behind them. See also Crisis of Faith, Smite Me, O Mighty Smiter, Nay-Theist. Often a part of a God and Satan Are Both Jerks storyline. Can result in A God Am I, Did You Just Punch Out Cthulhu?, and/or Broke Your Arm Punching Out Cthulhu. For a more Postmodern take, compare Rage Against the Author.

If someone actually succeeds in this endeavor, see Kill the God. For god versus god, see Divine Conflict.

God's reaction is to calmly and dispassionately turn him into a small pile of sewage, and cut Hell's space in half.

Major Tanya Degurechaff gives a speech to her 203rd Aerial Mage Battalion before starting their mission.

Alternative Title(s): Rage Against The Heaven

Major Tanya Degurechaff gives a speech to her 203rd Aerial Mage Battalion before starting their mission.