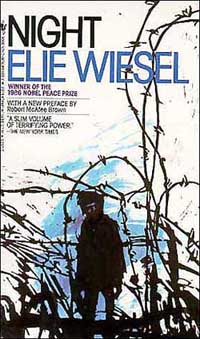 When he said Jesus again I couldn't take it, and for the only time in my life I was discourteous, which I regret to this day. I said, "Mr Mauriac . . . ten years or so ago, I have seen children, hundreds of Jewish children, who suffered more than Jesus did on his cross and we do not speak about it." I felt all of a sudden so embarrassed. I closed my notebook and went to the elevator. He ran after me. He pulled me back; he sat down in his chair, and I in mine, and he began weeping. I have rarely seen an old man weep like that, and I felt like such an idiot . . . And then, at the end, without saying anything, he simply said, "You know, maybe you should talk about it."
— Elie Wiesel
Advertisement:

On April 11, 1945, the Buchenwald concentration camp was liberated, and among the freed inmates was a young man named Elie Wiesel. He had lost his father, his mother, and one of his sisters. For a decade, he worked as a journalist and refused to even discuss The Holocaust. In 1954, he poured his experiences into a Yiddish book titled And the World Remained Silent, with its original manuscript running almost 900 pages longnote it received quite some compression into just 245 pages. However, the public was generally apathetic to it.

Then in 1955, he interviewed the Christian (and Christ-obsessed) novelist Francois Mauriac, with the results described in the page quote, and with Mauriac's help he published a greatly abridged edition in France, then America, calling it La Nuit (Night). The book's story centres around a man named Eliezer and his father Shlomo, and their experiences in Birkenau, Auschwitz and Buchenwald. The book has been translated into over 30 languages and is considered to be a quintessential work of Holocaust literature.

Night is also notable in that it's not really a novel, or a memoir, or an autobiography, or a nonfiction story, being somewhat loosely based on Wiesel's experiences. There's still lots of debate over how much of this book is factual, and for that reason, scholars still have trouble trying to approach it as a straightforward account.

Wiesel published two follow ups to the book: Dawn in 1961 and Day in 1962. These installments are more allegorical than autobiographical, but nonetheless continue Wiesel's examination of his thoughts and experiences as a Holocaust survivor in the years after the genocide's end.