Tomato in the Mirror 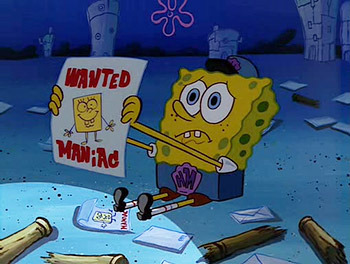 Our protagonist is going through a perfectly normal day. Only... something's wrong. The people around him are acting just a bit off. They keep mentioning a string of words, or are trying to herd him to a certain place.

It looks like the town's been taken over by a Puppeteer Parasite, and our hero's the only one left. He attempts to either escape and warn the outside world, or find where the invaders are coming from and shut it down.

But once he gets there, he discovers the horrifying truth: HE'S the fake! Cue screams of "What Have I Become?!" A robot, a clone, a robot clone, a ghost or nearly one or some other duplicate that forgot he wasn't the real thing, or was programmed to believe that he was, complete with Fake Memories of a Conveniently Unverifiable Cover Story. For extra oomph, expect the tomato to break the mirror in frustration.

A special case is where the character comes to realize that they are in fact fictional, either of the work itself or of a Show Within a Show. It often appears in a Real World Episode. For those examples, see Noticing the Fourth Wall.

In an ongoing series, it'll be a duplicate of one of the main characters. In a self-contained work, it'll just be someone who thinks they're human. Either way, it's an effective inversion of Puppeteer Parasite. Assuming the duplicate works through the immediate identity issues, suicidal tendencies, and/or desire to lash out with murderous intent, they may find themselves having to ask a Trial Balloon Question to see if "their" friends and family would still accept them.

Variation of the Tomato Surprise, hence the name (note the key difference is that here, the character doesn't know they're a tomato until the Internal Reveal). The opposite of this is And Then John Was a Zombie. Often includes a Once More, with Clarity! moment, as the character runs through a series of previous events and realizes the things they (and the audience) missed that would have revealed their true identity. Compare I Am Who?, which is (usually) a much more pleasant surprise, as well as Future Self Reveal and You Are What You Hate.

See also Expendable Clone and Dead All Along, in which case the truth may come out when they find "their" own body. If the surprise is the character discovering that they were the villain all along, that's The Killer in Me. If a lot of people experience this trope at once, you may have Everyone Is a Tomato.

It may or may not involve a real mirror.

This is a Twist Ending trope. Expect your tomatoes to be spoiled!

Alternative Title(s): Monster In The Mirror