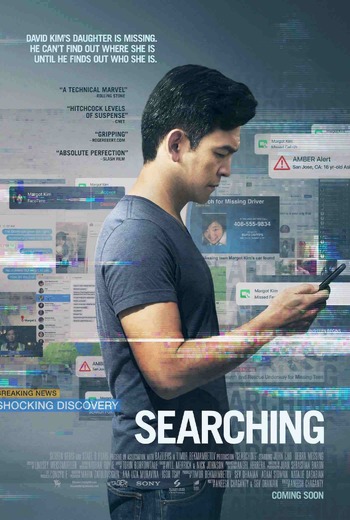 No one is lost without a trace.
Detective Vick: One, after study session Margot didn’t return home. Two, she didn’t attend school on Friday. And three, she’s been transferring funds for the last six months. We’ll handle the ground investigation, but as a parent you can help us with who your daughter talks to. Is that something you can do?
David Kim: Yes.
Advertisement:

Searching is a 2018 thriller film directed by Aneesh Chaganty from a script he co-wrote with Sev Ohanian. It stars John Cho, Debra Messing, Michelle La, and Joseph Lee.

David Kim (Cho) finds that his daughter Margot (La) has not returned from a study group session, and after nearly a whole day of not hearing from her, he begins to worry and calls the police. With the help of Detective Rosemary Vick (Messing), David goes through any means possible to find out what happened to Margot.

The film is notable for being told from the POV of laptop and phone screens, much like Unfriended's take on the Found Footage subgenre did back in 2014 (though this film is by a totally different production team).

A sequel has also been confirmed to be in development. Chaganty, who will return as a producer on the film, has disclosed it will not feature the characters or story of the first film, but share the same style.

Due to the mystery elements of the plot, a lot of these trope names reveal significant information about the plot by themselves. Please proceed with caution.