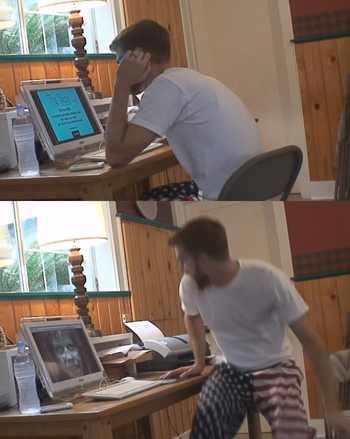 A Screamer Prank (usually referred to as a "Screamer") is a type of Jump Scare that's combined with Surprise Creepy. Originating on the Internet, it pretends at first to be a game, a test, a still image, a video that is not meant to be scary, etc. (more often than not, you will be instructed to look very closely at the image or turn your volume up). Then a scary image (usually a Nightmare Face) pops up with either a scream or a Scare Chord, which is when you realize — after you've pried yourself off the ceiling, of course — that you've been pranked.

All screamers are supposed to startle the viewer, though some go Up to Eleven with the Nightmare Fuel and others are so comical or ineptly done that they end up being Nightmare Retardant.

These are known for utilizing Schmuck Bait to a shameless degree and one of the many reasons why one should be wary of clicking on certain links on the internet. Also see Shock Site (horrifying imagery without the Jump Scare) and Last Note Nightmare, the latter being when a song has a creepy ending.

Please refrain from adding Video Examples to this trope.