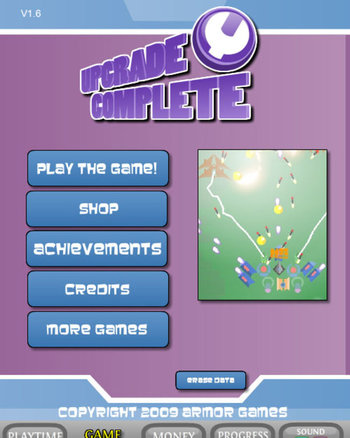 Welcome to the trope page for Upgrade Complete!

The goal of this page is to upgrade EVERYTHING!

To view this page, you'll first need to upgrade the game description.

Upgrade Complete is a shoot-em-up flash game based around the upgrade mechanic found in many video games. Instead of beating the schmup part of the game, the goal is to upgrade everything in the game. And by everything, we mean everything, from the music, sound and graphics, to purchasing the ability to actually play the game.

And of course, you can upgrade your ship as well, the upgrade system allowing you to add various weapons in a grid around the ship (and, of course, upgrade them.) Shooting down ships makes them drop coins that you need to collect in order to afford more upgrades, and if you defeat all the ships in a single wave without any of them reaching the bottom of the screen, you get to the next wave, which throws even more ships (and money) at you.

A sequel was also made (found here

,) offering even more things to upgrade this time around.

Upgrade Trope Examples for All Games

All games include examples of: