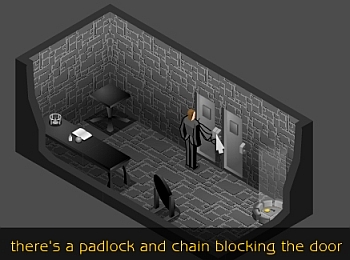 Room escape games are a stripped-down, minimalistic version of Point-and-Click Game, often with no plot and an unnamed amnesiac hero. The point of the game is usually getting out of a single room, or a series of rooms, by solving the puzzles.

Hidden clues and items will be scattered well within the room, and it's the player's job to find the clues, keys, items and the right combination of items and solving various puzzles to progress. To increase the player's tension, there will be hidden death traps or paths that lead to a point of no return. Making a mistake will often cause an item to be gone indefinitely, and some games will incorporate a time limit. Some games, due to difficulty, will release an official guide to solve the puzzle.

Due to being relatively easy to develop, room escape games are extremely common in Web Games.

And as with its older cousin, Nightmare Fuel is abundant.