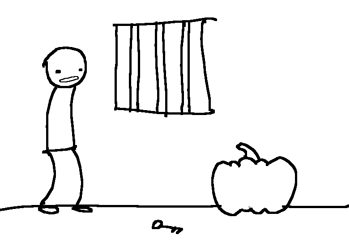 There is no pumpkin in this image.
You wake up locked in a deserted jail cell, completely alone. There is nothing at all in your cell, useful or otherwise.
Advertisement:

is the first webcomic under Andrew Hussie's Troperiffic MS Paint Adventures, originating in September 2006 as a humble Interactive Comic game run by Hussie and played by friends of his on an early precursor to the MSPA forums. One of the rules of the game was that Hussie had to pick the very first suggested command for each move, no matter how unfunny or preposterous. It stars an otherwise nondescript man trying to escape a strangely built jail, which isn't rife with pumpkins.

It was left unfinished for years with Hussie stating he didn't intend to continue it, but he capped off with an ending in September 2011 during the long Homestuck pre-end-of-act-5 hiatus. Compared to its successors, it doesn't make any pretense of having a coherent world or story - it exclusively exists for and is fueled by Rule of Funny. It was something of an early prototype for the likes of Problem Sleuth, and it is the origin of many of the running mythology gags that MSPA is so famous for.

was made by members of the Homestuck music team. Andrew Hussie's various teams for Homestuck content, What Pumpkin Studios and What Pumpkin Games, were named in honor of this adventure's running gag. Additionally, the cover art

◊ representing the adventure in Homestucknote Seen on page 31

was eventually reused as What Pumpkin Studios' first logo.

> With your trusty spoon, dig deeper for more info.

> Check prison register.
> Look at audience reactions.
> Show off your obscure factoid smarts.
> What are we doing again?