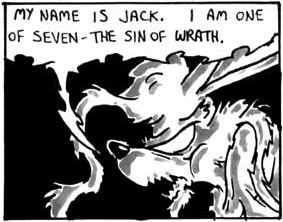 is a furry webcomic by David Hopkins. The main character, Jack, is a rabbit who is also The Grim Reaper. Most of the stories take place in the afterlife or involve death in some form.
Advertisement:

Oh, and fair warning, this comic can get very very very NSFW: gore, sex, swearing, and all around blasphemy can be found. Went on a long hiatus for a twofold reason: Mr. Hopkins was figuring out the last few arcs that would wrap up the comic and due to something that happened with a former fan that nearly resulted in legal action on both sides. It is back on a schedule now where the full arc is posted after it is done as opposed to its former Monday-Wednesday-Friday schedule.

Also has a wiki.

Not to be confused with Jack Antonucci's webcomic of the same name.

Now has character pages under construction. A complete downloadable archive of the strip can be found here,

as the former website has gone completely offline at Hopkins' request. Another archive can be found here.

On January 18, 2021, David released most of his characters to the public domain.